AUGUST 2022: OBJECT OF THE MONTH AS WE CELEBTRATE WOMEN’S MONTH

Women’s Day is a important day to call for equality

National Women’s Day is a South African public holiday commemorating the 1956 march of approximately 20,000 women to the Union Buildings in Pretoria to petition containing more than 100,000 signatures against the country’s pass laws that required South Africans defined as “black” under The Population Registration Act to carry an internal passport, known as a pass, that served to maintain population segregation, control urbanisation, and manage migrant labour during the apartheid era.
The 1956 protest saw members of the Federation of South African Women (FSAW) rally against the Apartheid government. The protest was supported by mothers, daughters, sisters and friends who decided enough was enough and came together to initiate change. Not only did they march, they remained standing outside the Union Buildings in silence for 30 minutes in a non-violent and very powerful display of unity.
The first National Women’s Day was celebrated on 9 August 1995. In 2006, a reenactment of the march was staged for its 50th anniversary, with many of the 1956 march veterans participating.
The struggle for liberate

The Federation of South African Women was launched in Johannesburg in 1954 as the first attempt to establish a broad-based women’s organization. The group was conceptualized by Amina Cachalia, Lillian Ngoyi, Ray Simons, Helen Joseph.
The group’s constitution stated the objectives of the Federation were to bring the women of South Africa together to secure full equality of opportunity for all women, regardless of race, colour or creed; to remove social, legal and economic disabilities; to work for the protection of the women and children.

A Women`s Charter was written at the Federation’s first conference and called for the enfranchisement of men and women of all races; equality of opportunity in employment; equal pay for equal work; equal rights in relation to property, marriage and children; and the removal of all laws and customs that denied women such equality. The Charter further demanded paid maternity leave, childcare for working mothers, and free and compulsory education for all South African children. 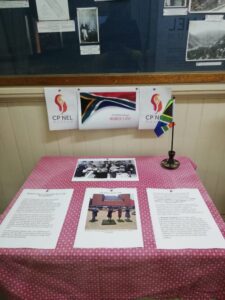 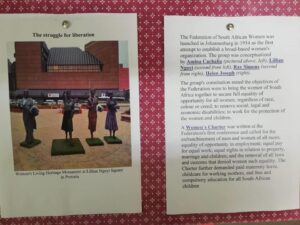 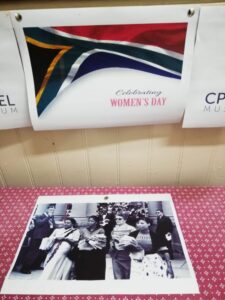