In the main hall the cultural and natural historic aspects of the ostrich are depicted.
We will take you back to the ancient history of the ostrich – where it was first discovered ten thousand years ago, carved into rock in the Sahara desert. The ostrich is known as the biggest bird in the world, but is unfortunately unable to fly because of its weight. It can run sixty to seventy km/h and weighs between ninety and a hundred kilograms.

You will experience the ostrich industry in its entirety, amongst others the following:

There is a variety of feathers and feather products.

Different designs such as jackets, shoes and handbags are made from this expensive material.

One egg of an ostrich can host twenty-five chicken eggs. While at the museum, take a look at the first breeding machine, invented by Author Douglass. 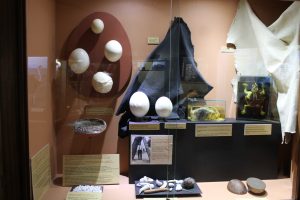